For Freedom Space with Rivers is a six month intergenerational arts project being led creatively by Rachel Clive and Kirsty Stansfield. It is building on Rachel Clive’s ecological theatre practice-based research at the University of Glasgow in collaboration with Kirsty Stansfield’s arts in health practise at the Prince and Princess of Wales Hospice.

The concept and opening questions

River flooding, like sea level rise, is increasing across the world and the effect of this on humans who live by rivers can be devastating. Freedom space for rivers thinking is an approach to river/ flood risk management which seeks to workwith rivers as they respond to a changing climate, rather than against them. It acknowledges that there are urban areas in which hard engineering approaches are necessary but advocates, where possible, for “more space for rivers to migrate and flood naturally” (Biron et al, 2014). When rivers have the freedom space to find their own way, they enrich the environment and nurture biodiversity in the process. Protecting freedom space for rivers means not building new developments on flood plains. As flooding increases, humans will have to retreat from rivers in some areas, and relocate, something that will clearly be easier for some humans than others.

This project is interested in generating conversations, creative processes and art-works about our connections with the rivers and waterways we live with. What happens to freedom space for rivers thinking in urban contexts, given the constraints on rivers in built up areas? How do we understand and experience freedom space for rivers thinking both practically and emotionally? How might we explore it creatively? What does freedom space mean for us as humans? How do our personal, social and material circumstances affect our experiences and understandings of freedom space?

How might we respect and nurture our own and each others freedom space, as well as that of rivers, across our multiple differences? 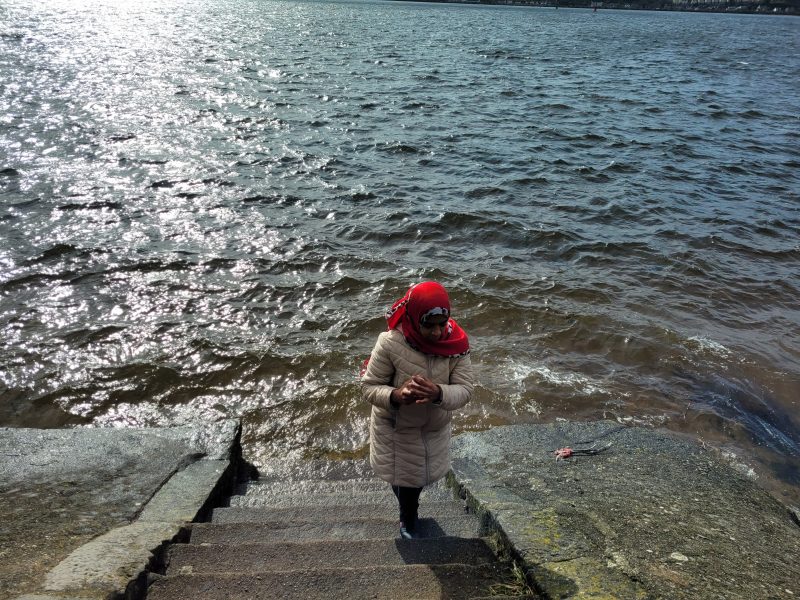 The project is offering a series of arts-based workshops and individual arts commissions exploring our understandings and expressions of freedom space for rivers, with particular reference to the River Clyde and its tributaries. The first workshop series relates to COP26, and is based at the University of Glasgow. The second workshop series is evolving around questions of health and care, and is based at the Prince and Princess of Wales Hospice. The third workshop series is focussing on urgent questions of precarity, migration, safety/asylum and solidarity and is based at Interfaith Glasgow. From these group workshops 15 individual artist commissions are being supported by the project. These commissions are being developed collectively with reference to a large travelling scroll, and will be shared publicly at the University of Glasgow in May 2022, six months after the end of COP26.

The project is funded by Being Human, the UK’s only national festival of the humanities, and presented as part of the University of Glasgow’s The Dear Green Bothy programme, hosting creative and critical responses to climate emergency.

If you would like to engage with the project in any way then please contact Rachel Clive on Rachel.Clive@glasgow.ac.uk or Casi Dylan on Casi.Dylan@glasgow.ac.uk Who is Moray Art Centre?

Moray Art Centre (MAC) is a registered charity offering a community hub for everyone with a focus on making art accessible to all. MAC runs our many in-person classes, workshops and Summer School while exhibiting work in the beautiful gallery spaces. We are a vibrant and motivating organisation that allows people to meet, discuss and generate a community of creativity. While based in Findhorn, we champion local artists and celebrate the rich culture throughout Moray and the North of Scotland. Our aim is to provide the tools of creativity so that anyone can benefit from their undoubted health and community benefits.

Our Art in Nature Workshop Pilot

In September 2021 Moray Art Centre (MAC) led a trial Art in Nature workshop designed in partnership with the local fellow charity Wild Things, Moray Wellbeing Hub and the artist Iona Leishman to teach participants about the local environment while using creativity to manage and improve their mental health.

Wild Things set the scene in the environment surrounding MAC at Findhorn, educating participants about the local habitats and wildlife. Back in the garden at MAC, artist Iona Leishman then guided them to making a joint mural using found materials and expressing their experiences with their new art skills. Moray Wellbeing Hub connected MAC to those with mental health issues who expressed an interest in the workshop, although this was not the only pathway to the programme. MAC provided a facilitator, promotion, arts materials, participant support (before, during and after the workshop) and a teaching space. Many peer-reviewed studies show how expressing creativity and spending time in nature can improve mental health, with the NHS providing prescriptions for people to partake in these activities (Arts Council 2016, Thomson et al 2020). Even prior to the impacts of the pandemic, awareness of the importance of robust mental health was growing. Now, post-lockdown, some people need help acclimatising to interacting with others and overcoming the fear of the past two years.

The Art in Nature workshop was designed with the recovery route of the CHIME framework in mind. The importance of connection is present when building relationships and cooperation with others in the workshop, especially when producing a joint art piece. The sense of empowerment participants gain when expressing their Identity by forging their creative strengths is also seen in the workshop. The survey results from the trial workshop were overwhelmingly positive in MAC’s provision of the workshop and the overall impacts on participants from the local community. 60% of those at the workshop stated that the connection with other people was what they appreciated most about the experience, demonstrating the need to provide services to help people interact with others. Everyone who took part in the trial felt buoyed by the experience with one participant remarking, “Thank you so much for letting my inner arty self and child out for a play.”

MAC is now applying for grants with the hope of offering at least 3 programmes of Art in Nature workshop – one for children, one for a specific group (e.g. care homes, Men’s Shed, etc.) and one for the general public. An award from Moray Communities Mental Health & Wellbeing Fund will enable MAC, Moray Wellbeing Hub and Wild Things to launch at least one series of workshops this year and help to improve the health and wellbeing of the local community. 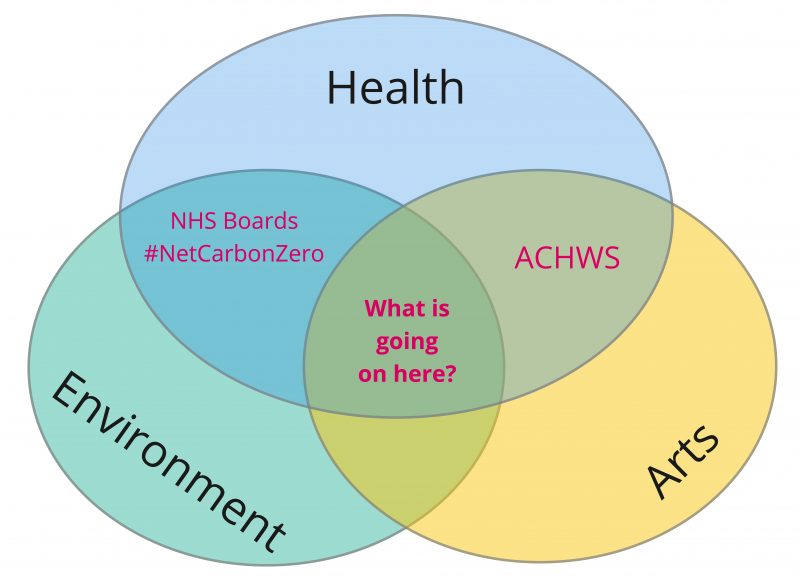 Health is one of the major areas affected by the climate crisis, now and in all forecasts for the future consequences of climate change. We see this in the form of the impacts of extreme weather, in particular heatwaves, but also as anxiety about climate change.

Health is bound up in the various Government Climate Change strategies where action on climate is also action on human health, such as relating to diet and a move towards a more plant-based diet, as just one example. Another key area is greenspace where human health benefits align closely with climate mitigation and adaptation strategies to ensure healthy, active environments for people and nature to thrive.

NHS Boards are facing significant challenges to meet #netcarbonzero targets as this affects every aspect of operations across energy, procurement, waste, transport, as well as public health dimensions of diet and greenspace.

ACHWS and Voluntary Health Scotland are planning to host a series of events at the intersection of arts, health and climate. The first event, planned for February 2022, will offer an overview of the range of relevant issues. This will be followed by further events on specific areas, such as mental health and greenspace.

We’d love to hear from you if you have relevant examples of projects and expertise you would like to contribute and share?  Please get in touch by emailing info@achws.org using the subject line ‘arts health climate’.

We are keen for contributions to be multi-vocal and to include arts and either/both health and climate environment voices. These might be ‘experts’ or ‘lay’ contributors and in selecting presentations we will be looking to ensure a diversity of representation and actively encourage contributions from people who may be under-represented in public dialogue regarding culture, health and climate action.

Chris Fremantle, Cultural Producer, Lecturer and Researcher and Board Member of ACHWS

some links that may be of interest

The São Paulo Declaration on Planetary Health is a multi-stakeholder call to action co-created by the global planetary health community. It outlines the actions necessary for us to achieve a just transformation to a world that optimizes the health & well-being of all people and the planet.

Going green: what do the public think about the NHS and climate change? With the NHS aiming to become the world’s first ‘net zero’ health care system, understanding the views of the public will be important for developing and implementing policies to successfully transition to net zero. This Health Foundation blog explores public perceptions of climate change, health and the NHS. It highlights key findings from an Ipsos MORI survey commissioned by the Health Foundation and considers their implications.